Yesterday I had a lunch comprised largely of bean products seasoned in a mediterranean/middle eastern way. I made chickpea flour pancakes by mixing half a cup of the flour with about the same amount of water, a pinch of salt, a tablespoon of olive oil and a bit of dried thyme. I made two pancakes (fried on a tiny bit of oil on a pan), but I could have easily made three thinner ones from this amount of batter. They were nice and aromatic thanks to the thyme, but next time I´d let the water absorb the flour for a longer time (a few hours), as it is often seen in recipes using chickpea flour. There are also recipes where you don´t fry the pancakes but bake them in the oven – I will tackle those some other day.

I served the pancakes with a variation on hummus made from canned fava beans (since I had a can that needed to go…). First I sauteed thin sliced onion with a clove of minced garlic, then added the beans and a pinch of salt. After ten minutes I transferred the mix into a blender, added about a tablespoon of ume plum vinegar, a tablespoon of tahini and 1/4 tsp of cumin and blended adding some water as required. This is SO much better if you use freshly cooked fava beans though! Sadly the can cannot compare (maybe because it wasn´t organic beans, but from the local turkish shop, the quality is not the same).

I also sauteed some finely cut kale with chinese cabbage and towards the end seasoned with tamari and mixed in raw rucola (arugula). The combination of these three dishes was a good idea 🙂 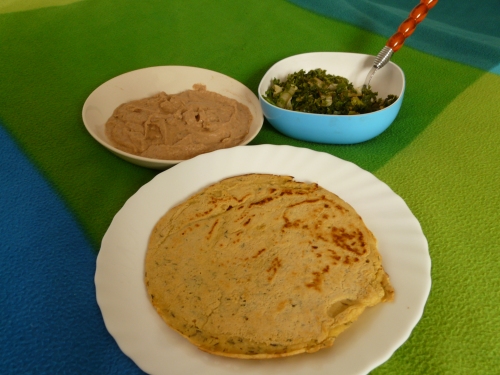 I reeeeally love hummus. Yet, I DID not plan to make it that day. It kind of…happened. I soaked fava beans overnight, then spent a looong time peeling their irritating skins off (they are too hard to digest), pressure cooked them for 45 minutes, and…they turned into something resembling porridge. They just totally fell apart. Too long cooking time, I assume. Anyway, that was their way to tell me to make hummus. So I heated them up in another pot (there was more than enough water still), added salt, cumin powder, lemon juice, chopped garlic (optional) and a good spoonful or two of tahini. Just a few stirs, some minutes to let it thicken, and voila, fava beans hummus is born! Really good stuff! Not the same as chickpea hummus, but not worse.

As a grain I had sweet millet cooked with hokkaido pumpkin (just 20 minutes and it´s ready). And I blanched some chinese cabbage, green beans and kale with it.