In this hot weather I make salads a lot as it´s the only thing that helps me stay cool and hydrated, plus it´s really quick so I don´t need to stand above the gas stove 😀

For this salad I used leftover brown rice into which I mixed several omega-3 rich ingredients: roasted pumpkin seeds, hemp seeds and 2 tsp of flaxseed oil. I also added chopped olives, one torn up sheet of nori seaweed, finely cut fresh dill and a teaspoon of organic coarse-grain mustard. So refreshing!! 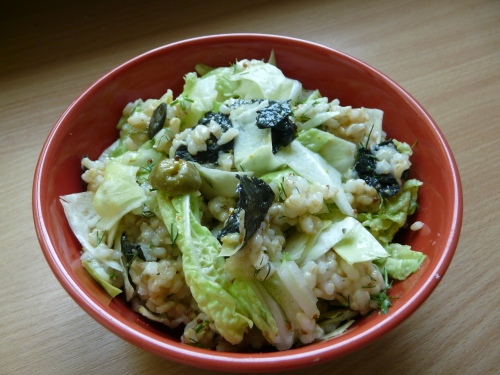 Arrival of the mill!

Here it is, my new treasure!! He came allllll the way from Hungary. He weighs over 5 kilos and is built from massive beech wood. He is purely hand-powered, no electricity! And let me tell you, it is quite a workout :-p What I am talking about? My new birthday present, a grain mill and flaker combined in one device.  Rolling the flakes is really fast and easy, I was very surprised by that. Lovely fresh flakes in an instant! On the other hand, to mill some fine flour for baking purposes takes pretty damn long. But well, that´s what you get when you insist on having a non-electric mill 😀 Luckily we bake only very rarely and also small amounts, so it´s still worth the effort – the benefits (and taste qualities) of home-milled flour are just too big. Unfortunately, these mills/flakers are still very expensive, it is after all a little piece of art, not some plastic junk made by a multinational high-tech company… Good old craft! I really hope this baby lasts a long time….

This meal is so minimalistic that I wonder whether I should be posting it, but I guess we all need some very simple ideas and inspiration 😀

Heat some oil and sautee first half-moons of onion, then sliced (dried and presoaked, or fresh) shiitake mushrooms, let them soften, then add rounds of leek, sliced curly cabbage and half-moons of daikon.  Season with salt and pepper and serve with some brown rice.Voila!

Grain&Tempeh Casserole and a Salad

One of my last ovendishes…before the heat struck! 😀 Now I truly don´t bake ANYTHING!!

This one was made by combining cooked leftover rice and hato mugi mixture with some sauteed veggies and pan-fried tempeh. For the veggies water or oil-sautee  some cut up leek, green beans, celery stalk and kohlrabi (I used stems), just very shortly, so they are not raw, and season with tamari, thyme and black pepper. Mix with raw grated carrot. Pan-fry tempeh in a moderate amount of oil until golden and spray lightly with some tamari. Mix all ingredients through, move into a baking form and bake on about 200 °C until crispy.

Casseroles go well with salads, which bring more light uplifting energy – mine is made from lollo rosso lettuce, chinese cabbage and cucumber, with added olives, roasted pumpkin seeds and a vinaigrette of 2 tsp apple cider vinegar, 2 tsp flaxseed oil, a pinch of salt and half a clove of finely minced garlic.

Mediterranean bulghur with broccoli and cauliflower

Lately I´m quite in love with bulghur – it´s very quick cooking, has a very pleasant texture and it seems easy on digestion, even though it´s gluten, probably because it´s sprouted before it´s dried.

I just cook it for 15-20 minutes in a double amount of water, with a pinch of salt.

In a separate pot I heated 2 tsp of olive oil and sauteed minced garlic ( 1 or 2 cloves – I´m doing more garlic right now) for maybe 2 minutes, then added fresh cracked pepper and a blend of Italian herbs (oregano, basil, rosemary, thyme… any will do) and then a bunch of florets of cauliflower and broccoli. I added some water (maybe 2 cm), covered the pot with a lid and let simmer for some 15 minutes or so. When the veggies got soft, I mixed them into the cooked bulghur.

Served with a lettuce and rucola salad with a dressing of 2 tsp flaxseed oil, 2 tsp apple cider vinegar, a small pinch of salt and finely chopped fresh dill. And for the man I made a little side of seitan cooked under a lid with some maple syrup, shoyu, mirin and lemon juice 🙂

As a grain I had  a pressure cooked rice/amaranth mixture (soaked 24 hours beforehand). The first vegetable dish is a stew with layers: the bottom layer is about 1 tsp of thinly spread ume paste, then halfmoons of onion, shredded young white cabbage, coarsely grated carrot and finely chopped fresh dill. To that just add about 2-3 cm of water (the veggies should not be covered), cover pot with a lid, bring to boil, and then simmer on a low flame about 20 minutes. Mix through.

The second dish is “Winter simmer” from Kristina Turner´s Self-healing Cookbook. First I boiled about half a cup of water, then added half of a smaller butternut squash cut into cubes, about 10 cm of dried wakame torn into pieces, halfmoons from half of an onion and half of a sliced celery stalk. Season with about a teaspoon of tamari. Simmer the stew for 20-30 minutes, until the squash is tender, and mix through. 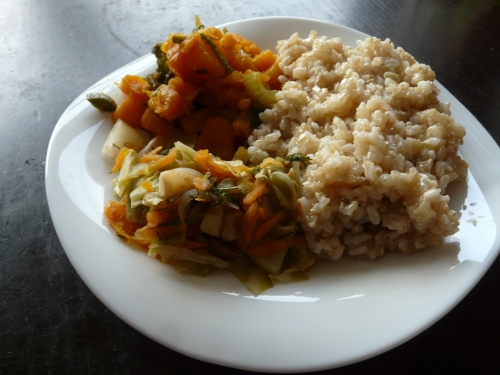 Some changes to my meals…

Macromagician is lately going through some dietary changes, it´s been a bit of a wild ride…first with my oil-free (almost) no-dessert regimen (including no nuts and sunflower/flax seeds) which was designed by my macro teacher…and now switching to an upgraded and modified version which is more anti-candida oriented. So right now I am starting a sort of “macro anti-candida diet” for some time. I plan to get back to the original dietary plan which I had, but for now this is the regimen, because I realized that I am not treating the candida overgrowth strongly enough and the effects can be quite devastating. Diet alone (the idea of starving the yeasts by not feeding them the simple sugars they like best) might and might not work, depending on the specific case. Anyway, that´s my take on it, there is a lot of contradictory information on candida out there, especially within the macro community, so you just gotta make your own opinion on it in case you are struggling with this issue. Apparently almost all of us in these modern times have a candida overgrowth in our intestines (and not only there) to some extent, due to our common background of eating acidizing foods, combined with long-term/frequent medication use, pollution, stress etc. 😦

Thus, my new modifications are: introducing some natural antifungal remedies (such as coconut oil, which is used by some macro teachers/students and not by others; or garlic, flax and olive oil, lemon, apple cider vinegar, but also some spirulina/chlorella, barley grass powder etc.) and also a daily cleanse with grey bentonite clay which pulls out toxins from the body without being absorbed by the body, it literally just passes through carrying away the unwanted fungi and other harmful bacteria. I could (and might) write more about my anti-candida plan, but let´s get back to the food!

I wanted to let you know mostly because there might  be from now on less activity on the blog (let´s face it – the anti-candida diet is often very plain and not exciting in terms of interesting recipes) and also some of the ingredients might not be from the standard macrobiotic diet (such as above mentioned coconut oil which didn´t yet make it to the classical MB literature, but I believe it might one day, as it´s starting to be used more widely).

Yesterday my lunch was: sprouted and cooked sweet millet with gomasio (I am now soaking/sprouting all my grains for 24 hours to make them easy on the digestion), steamed veggies (green beans, carrot, daikon, turnip, leek, broccoli and collard leaves), long-baked onion/carrot/pumpkin drizzled with olive oil and sprinkled with salt and rosemary (baked for about 45 minutes, first under a tinfoil, then uncovered) and a salad of lettuce and rucola with a dressing of 2 tsp flax oil, 2 tsp apple cider vinegar, salt and black pepper (for 2 people).

Macrobiotic magic in the kitchen
Create a free website or blog at WordPress.com.