What a simple way to improve your “usual” onion soup – add a piece of sourdough bread to thicken it! 😀

For onion soup I sautee at least two medium or large onions (I prefer red onions – they are sweeter) on a bit of water with a pinch of salt, the longer the better, they should be really soft. Then I add two bowls of hot water (or as much as needed) and bring to boil and then simmer, 5-10 more minutes.  This time I added also cubes cut up from half a slice of our homemade bread. Let them (almost) dissolve, stirring at times. Towards the end add about a teaspoon of ginger juice and diluted brown miso to taste. 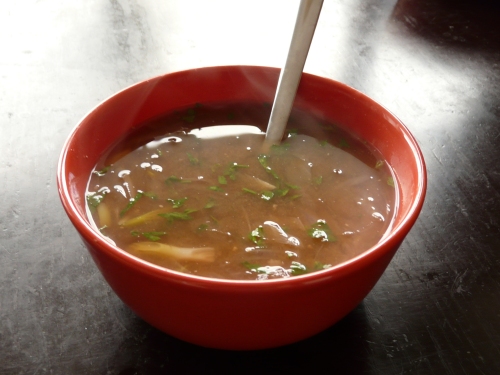 I just thought that this looks really pretty and that it´s quite a nice balanced macro meal, so here you are 😀

Vegetable dish 1: kinpira made from dried/soaked burdock, carrot, a splash of tamari and ginger juice and finely cut carrot tops

Vegetable dish 2: chopped red cabbage sauteed under a lid with a bit of water and a tablespoon of ume vinegar and a bit of dried thyme

Protein: chickpeas with chunks of hokkaido pumpkin and some salt to taste (not in picture) 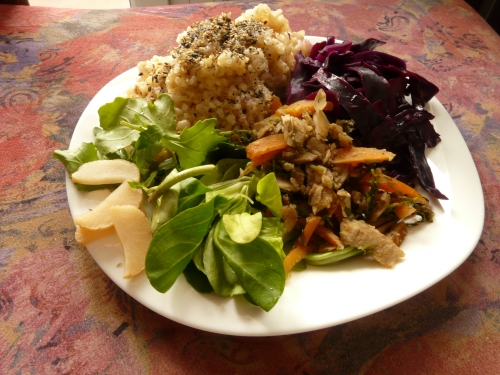 I already posted a recipe for glazed yuba on this blog, you can find it here. This time I made this one just for my boyfriend (except that I used half white flour and half whole-wheat flour for tempura batter, as he is not sensitive to gluten). For myself I made an oil-free and less-yin version 😀 I just soaked the yuba strips overnight, making sure they are fully covered by water, cut them up into bite-size pieces and then I cooked them in 1 tbsp of shoyu, 1 tbsp of mirin, 1/2 tbsp of lemon juice, 1/2 tbsp of rice malt (instead of maple syrup) and a bit of water, so the yuba was almost submerged. I first cooked the yuba for a while with a lid on and then let the liquid slowly evaporate with a lid off. It was almost as tasty as my boyfriend´s deep-fried version!

I served the yuba on soba noodles, with water-sauteed veggies (onion, leek, broccoli, carrot and cabbage). 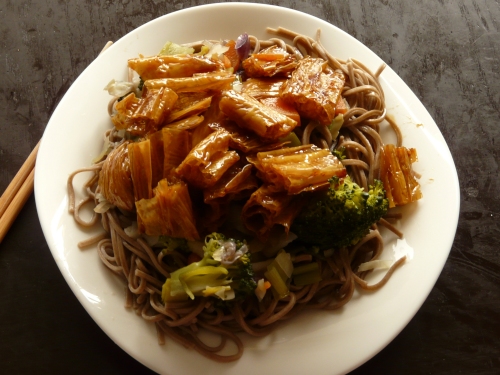 Here in Slovenia it´s most definitely asparagus season – on the farmer´s market almost every stand has these beautiful bundles of tall green asparagus stalks, they are apparently very popular. Now I had asparagus only a few times in my life, as in the Czech Republic it´s not a vegetable people would normally use. You can sometimes find it hidden in a soup, and it´s easier to find in a posh restaurant. But here it´s a food of “normal people” 😀 I found out asparagus is not your typical “macrobiotic vegetable” (it seems that it´s a tad too yin), but I wanted to give it a try anyway, so I purchased a small bundle and tried steaming it, baking it under a tin foil with some water, roasting it dry in the oven and woking it with other veggies 🙂 Here are two of these creations.

The first one is asparagus simply steamed with a sprinkle of salt. Served with millet-cauliflower mash (see my recipes for this one – basically it´s just millet and cauliflower cooked together and then well mashed), into which I added a teaspoon of shiro miso for more flavour. I also made a “roots and tops” vegetable dish – one big spring carrot sliced into thin diagonals, simmered one minute with water to cover, then I added its fiber-rich cut up tops and simmered under a lid for a couple minutes more, towards the end adding just half a teaspoon of shoyu. 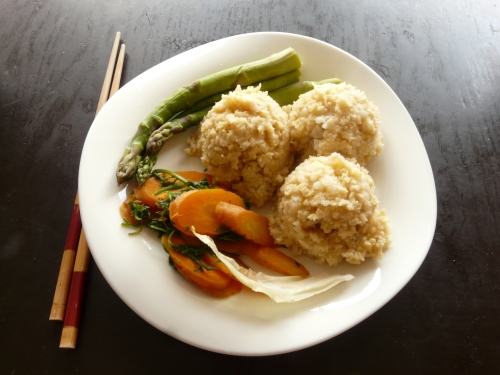 The other meal is asparagus baked in the oven on 200°C for about 15 minutes, with a sprinkle of salt. For my boyfriend I added also a coating of oil and some extra cracked black pepper. Served with rice/amaranth mixture and the Purple passion stew from Jessica Porter´s book. It´s basically a nishime – a piece of kombu on the bottom of a heavy pot, then rounds of daikon, half of a small red cabbage cut into small chunks, and just about an inch of water. I simmered the veggies for half an hour, covered with a lid. It turns the daikon deep purple, how cool!! 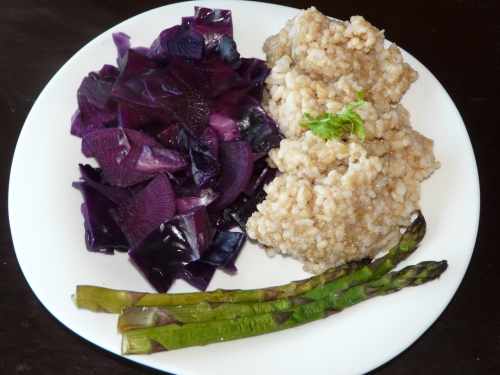 This is a very simple, quick dessert which has no sweetener except for fruit, there´s not even a touch of rice syrup or maple syrup or such. Therefore it´s VERY mildly sweet, but good if you´re in the need of watching your dessert intake and still longing for something a bit sweeter than sweet vegetables 😀

I had some leftover shortgrain brown rice which I pressure cooked for 45 minutes with dried chestnuts (in a roughly 1:1 ratio, because it was a small amount only). It´s good to soak the chestnuts overnight before you cook them. The next day I blended this leftover rice/chestnut mix in a blender with a bit of water (just enough to make the blender work) and half of a bigger unpeeled apple cut into chunks. Then I transferred the puree into a pot, added a pinch of salt and simmered for maybe ten minutes. Towards the end I added a teaspoon of kuzu diluted in a little bit of cold water and brought to boil. You must make sure your kuzu went through boil. You can enjoy your dessert warm or let it cool and set a bit (it will resemble pudding more when the kuzu is allowed to cool). You can sprinkle the top with some cinnamon. 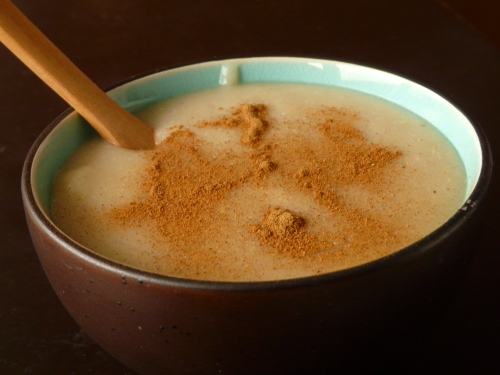 This time I tried a recipe out of my most favourite macro book – Jessica Porter´s Hip Chick´s Guide to Macrobiotics. This boiled salad uses a slightly different method than the other boiled salad I posted about – you don´t really blanche the veggies, you just dip them into boiling water and immediately turn off the gas, leaving them in the water until they get a bit more bright, about one or two minutes. They stay very crunchy and taste almost like raw (well, except for the leafy greens perhaps, which get wilted very fast). This is a positive feature of this salad, and at the same time it can be a disadvantage if you have more troubled digestion, as I do – I think I prefer a “real” boiled salad, where the veggies actually boil for a couple of minutes. But I´m sure this will be great once the weather is hot and once my digestion improves so that I can process more raw food 😀

I “boiled” red radishes, curly cabbage, pointed cabbage, spring onion, parsnips, parsley root, green and yellow kohlrabi, green beans, and also (very briefly) some rucola, dandelion greens and corn salad greens. I topped the salad with a dressing coming from the same book. It doesn´t look too pretty, but it tastes very nice! Just roast half a cup of pumpkin seeds (which you washed and drained beforehand) until they start popping and turning more brown, then either process them in a blender, or (as I did) grind them in a suribachi until they are mostly crushed (depends what consistency you are aiming for). Then add half a tablespoon of umepaste and a bit of water, to your liking, mine came out quite chunky. 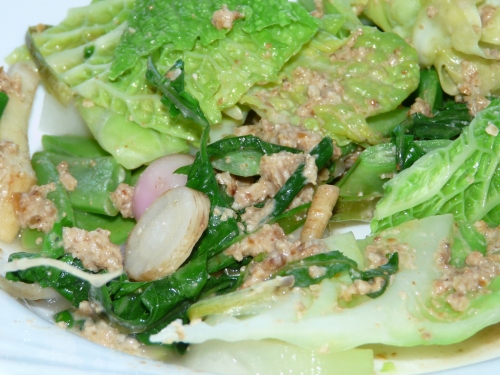 This recipe comes from Kristina Turner´s “The self-healing cookbook”, which contains quite many awesome recipes, unfortunately not so many oil-free ones for my current diet 😀 This one has a bit of tahini, so it´s not completely oil-free, but it´s just one spoon 😉 And you can also definitely pass on the tahini!

My boyfriend recently succeeded in his sourdough project and created a wonderful homemade sourdough bread which was calling for some sort of spread. The carrot butter is very easy to make and more sweet than savoury.

Steam 3 or 4 cups of carrots cut into thick rounds of smaller chunks, for about 20-30 minutes until very tender. Then blend in a blender with about half a cup of water (I used water from the steaming, which had a bit of a carrot aroma) and a pinch of salt. Transfer to a pot, heat up, add 1 tablespoon of kuzu (diluted in two tablespoons of cold water), whisk vigorously to avoid lumps, and bring to boil. Simmer for a few minutes while stirring. For a more creamy consistency add one (or two) tablespoons of tahini. Store in a jar in the fridge. 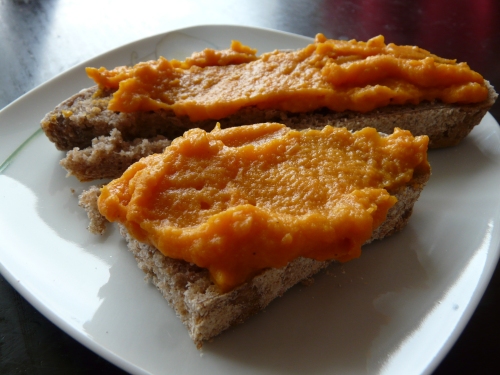 Macrobiotic magic in the kitchen
Blog at WordPress.com.