Vegetables with arame and lemony kuzu sauce from Sweetveg

Today I am just going to link to a post from one great macro blog with recipes you should definitely try! This time the Sweetveg blog inspired me to try a modified version of the “Vegetables with arame and lemony kuzu sauce“.

I followed it quite closely, except I didn´t have celery stalks, so I just omitted those, and instead of the rutabaga (which you cannot find here) I used parsley root. I also used dried/soaked lotus root slices and dried/soaked/sliced shiitake mushrooms (both are suggested at the end of the original post to be used in this recipe). I´m not sure which cabbage was used in the original recipe, but I had the “curly” savoy variety which works great in stews. I  didn´t have daikon so I used black radish, which is just another member of the radish family and has a more sharp and earthy taste than the daikon.  The sauce I followed exactly. As a sidedish I made a rice/amaranth mixture with roasted sunflower and pumpkin seeds.

I first sauteed some sliced onion on oil with a pinch of salt and then added roughly chopped veggies – carrot, burdock root and green savoy cabbage, and sauteed them all for a while together, in a heavy cast iron pot. Then I added cubes of smoked tofu and a substantial amount of sauerkraut. I filled the pot with enough water to almost cover the vegetables, sprinkled some dried thyme and tamari soy sauce on top, put the heavy lid on and let the stew gently simmer for perhaps half an hour. Towards the end I heated oil in a pan and after it warmed up I stirred in a couple tablespoons of corn flour to create a base for a simple thickener for the stew. Once the flour starts turning golden and emitting a roasted smell, you can carefully pour in some water until you get a thick creamy sauce. Stir well to prevent lumps from forming while cooking the sauce  for a couple minutes. When the stew is ready, mix the sauce into the veggies and tofu and cook all together for another five minutes or so. Done!

I also had some steamed chinese cabbage to balance the heavy grounding energy of the stew, served with a sauce of white (shiro) miso, tahini and lemon (you could eat the sauce raw, or let it come to boil in a little pan, that way the miso will be easier on your digestion). There was also pressure cooked brown rice with roasted sesame seeds.

Vegetable stew with seitan and kuzu

My first time trying seitan, yay!! I had gluten sensitivity for a couple of years, but thanks to the macrobiotic diet my gut has healed to a large extent, so I´m venturing a bit more into the realm of glutinous grains. Seitan is a type of faux meat (if you wish to see it that way, anyway :-D) made from pure wheat gluten, which is a protein obtained from wheat flour with all starch removed. And if you flavour it well (or purchase a well-flavoured ready to eat seitan) it´s really tasty! I had seitan that was already quite flavourful, but I still had to add some soy sauce.

First of all I placed a 4 cm piece of kombu in the bottom of a heavy pot, on top of the kombu I put chunks of seitan, then one onion cut into large pieces, one carrot cut into large chunks as well, a couple of pieces of yellow kohlrabi and  finely cut celery root, 2/3 cup of water, a generous sprinkle of dried italian herbs (basil, oregano…) and 2 tsp of shoyu soy sauce. I covered the pot with a lid and brought the content to boil, then I simmered the veggies on a lower flame until soft. At the end I added a teaspoon of kuzu root starch dissolved in a tiny bit of cold water and stirred it in quickly, avoiding lumps. I brought the stew to boil and simmered for  a few minutes more until it thickened considerably and added a nice glaze to the meal. I served the stew with rice/amaranth mixture and some spring onion. 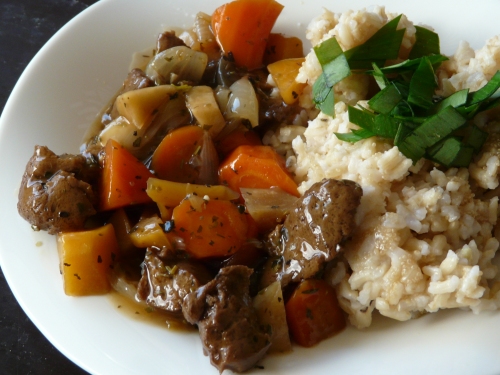